Latin: Arctostaphylos
Family: Ericaceae (Heath)
Arctostaphylos, from ἄρκτος árktos "bear" and σταφυλή staphulḗ "bunch of grapes," is a genus of plants comprising the manzanitas and bearberries.
Manzanita's medicine is reflected in (seen through) the bears' hibernation, during which time bears do not urinate and by the time spring arrives the kidneys have undergone major stress and have lost most of their function. The bear then demonstrates a most unusual and quite remarkable ability to regenerate their kidneys and recover full function for the remaining spring and summer. Where Manzanita grows wild, it is one of the main sources of food, being higher in nutrients and especially calories than most other wild foods available. Bears are known to feast on the Manzanita berry in the late summer and fall, indicating the medicine of Manzanita. 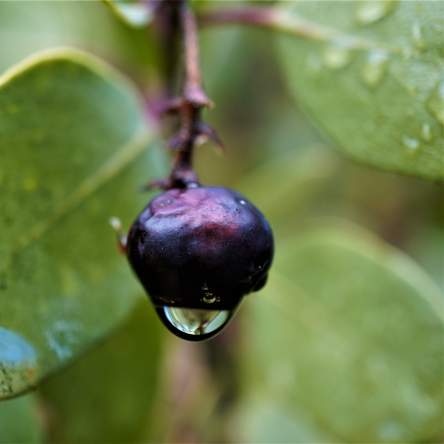 The name Manzanita derives from the Spanish 'Little Apple.'
The most distinguishing characteristics about the manzanita are its smooth, matte-finished red bark and its twisted, evergreen leaves and branches. Only in the oldest plants does the bark ever shred. The heartwood of the larger branches is usually about the same shade of red as the bark. The leaves are smooth, wide, dull green, and thick as leather. The flowers bloom in little nodding clusters and are pinkish and urn shaped, maturing into red, tart, mealy berries with from 4 to 10 seeds. The height of manzanitas varies from that of two to three-foot shrubs to 30-foot tall individuals. (Michael Moore, Plants of the Mountain West)
The name Manzanita derives from the Spanish for “little apple.” It was used as early as the 13th century by Native Americans for food and as tobacco. They also made cider from the fresh berries. The berries are edible, the leaves are used to treat urinary tract infections, and the green bark is used to treat nausea. The green bark lies just below the outer red bark of the branches. The tannins found in the green bark help kill microbes that can cause gastrointestinal distress.
The bark helps to kill H. pylori, the microbe associated with stomach ulcers. Too much bark tea can also upset the stomach, be sure to use recommended doses and not take the tea for more than 2 to 3 days.
Compounds found in the green bark also help to treat dermatitis, poison oak and ivy, as well as insect bites.
The edible berries are high in vitamin C and contain 3 times more antioxidants than blueberries or pomegranates.
Chewing the leaves of a manzanita tree into a poultice can treat open sores and ease headaches. Chewing on the leaves without swallowing them can also help to ease stomach cramping.
Manzanita contains arbutin, a compound known for converting to hydroquinone that can help counter urinary tract infections, by rebalancing pH and fighting bacterial infections. The leaves are also high in tannins that help tone skin, tissues, and help prevent recurring infections. The leaves are vasoconstricting and helpful for treating heavy menstrual bleeding and postpartum, to help tone injured vaginal and cervical tissues. A douche made from the leaves will also help rebalance vaginal pH.
Among the Cahuilla Native Americans of southern California, manzanita was regarded as a primary food source since it could be collected in volume and stored. Though the use of manzanita seems to be nearly a lost art today, it was once considered an important food additive. Typically, manzanita was used as an aspic, a thickener, or a sweetener to other foods. It also makes a pleasant beverage.